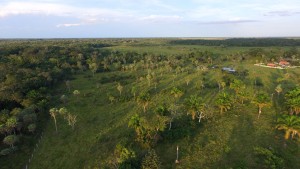 17 August 2020 - In 2019 the Parrot Society UK sent a further grant from its Conservation Fund to support the reserve and its programme of protecting the Blue-throated Macaws. Bennett Hennessy has just sent us this comprehensive report of the 2019/20 results, showing an even better year than the last breeding season! See PDF and pictures at - 2019-20 Breeding Report
It is also well summarised in a very well put-together video at Armonia Video

In 2018 The Parrot Society UK sent money from its Conservation Fund to the Asociacon Armonia in Bolivia, to help establish a reserve for Blue-throated Macaws (Ara glaucogularis). Tjalle Boorsma and Bennett Hennessey sent us this report from the Laney Rickman Reserve, indicating a successful season with 9 occupied nest boxes and 12 fully-fledged chicks. This vital breeding habitat is now protected for the ongoing support of this endangered species. 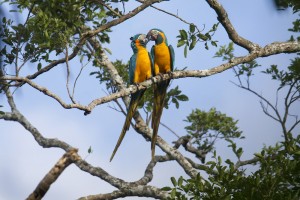 Pair of Blue-throated Macaws on the reserve

The main goals are to protect and increase vital breeding habitat for these macaws, and increasing nest cavity availability by providing nest boxes; to establish a Visitor Centre for local education; to create impenetrable firebreaks throughout the reserve; to create wildlife-friendly fencing around the reserve's perimeter; begin small-scale ranching (100 head of cattle) to fulfil government requirements; to establish a macaw monitoring protocol; and to study local movement of the southern sub-population of this macaw. Parts of the reserve are planted with Africanized grass, which Armonia can lease for low-impact cattle ranching, to help cover reserve management costs. 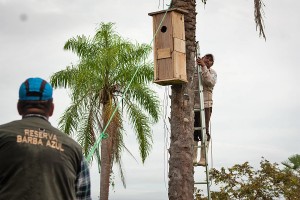 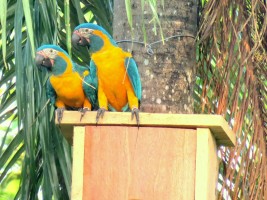 A total of 5 breeding birds were confirmed to be ringed individuals, fledged from Armonia's nest boxes in previous years. Competition for nest sites from the abundant Blue & Yellow macaws (Ara ararauna) was overcome by reducing the entrance hole size from 12 cm x 25 cm to no more than 10 cm x 10 cm. Over the last 14 years of the nest box programme, there has been 100% occupancy by a variety of birds, thus indicating the severe lack of natural nesting sites. 55 nest boxes have been used by Blue-throated Macaws, producing 146 eggs in total, from which 99 chicks hatched, and 81 were successfully fledged and released back into the wild. 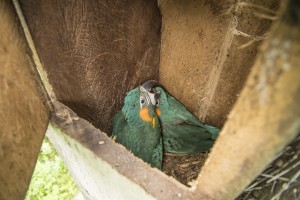 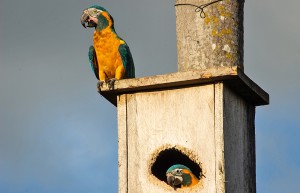 This project looks set to continue successfully, and hopefully The Parrot Society UK will continue to use its Conservation Fund with ongoing financial support.

"Hope things are well with you and you are keeping out of harm's way. Many of our city staff have been in lock-down like most of the world, but our Blue-throated Macaw work on these reserves has not been halted as they were always in isolation in a way. The Blue-throated Macaws have used 5 nest boxes this year. Six chicks have successfully fledged, and we still have 6 large chicks close to fledging.

We were hoping to send you a report by early May, but since we are still waiting on the last 6 large chicks to fledge, that will have to be postponed for a bit. But also, the city is in lock-down, so though they have taken great photos- we have no way of getting them in high resolution until the city opens up. But as soon as we can satisfy these two parts, we will be sending you a report, and we will coordinate the reporting with the other supporters so that the information will be released in newsletters and social media at the same time."