This summary received from Mark Hall: Fuerte’s Parrot (Hapalopsittaca fuertesi - also known as Indigo-winged parrot) is an endemic species to Colombia and one of the rarest bird species in the country. It is found exclusively in the temperate forests of the western slope of the Central Andes of Colombia. Until a few years ago it was believed to be an extinct species but was rediscovered in 2002. It is around 23.5 cms. long  and its coloration is of various shades of green, turning olive towards the face, back and chest. It has a blue crown and a marked red patch on the shoulders, presenting this same coloration under the tail. It has an indigo blue coloration on the flanks of the wings whence the name Indigo-winged parrot derives. 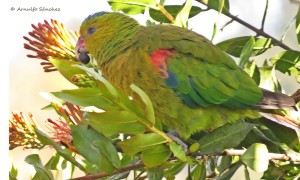 It is known from a relatively small area between the departments of Quindío, Risaralda, Caldas and Tolima, and the total population has been estimated to be 250 individuals. This very small size of the population, together with the deterioration of its habitat, means that this is a species in critical danger of extinction (CR). Some authors consider that this species probably has a wider distribution range along the Central mountain range, but field explorations are needed to confirm this hypothesis.  The main threats to this species are the fragmentation and destruction of the high Andean forests and the great ignorance of their ecology in general. In addition, due to the limited extent of the habitat of this species, any decline that occurs as a result of the expansion of traditional agricultural systems or illicit crops has a disproportionate impact. In the study area in the municipality of Santa Rosa de Cabal between 3,000 and 3,300 meters above sea level, Fuerte’s parrot shares its habitat with other species of parrot such as: Leptosittaca branickii, Amazona mercenarius, Pionus chalcopterus and Pionus tumultuosus.

There is very little information on this species, because some years ago it was believed to be extinct. Only now that it has been found again are there some photographic records and several observations at a specific site on a route that leads from Santa Rosa de Cabal al Nevado de Santa Isabel, at a height of 3,200m above sea level. In this specific site, we observed a population of 8 individuals in 2015. in 2016 we observed 11 individuals and in March 2018 we were able to observe a larger group of 18 individuals that increased to 21 in 2019. We have noted with concern that the vegetation on which this species is feeding has been decreasing despite the fact that it is within a natural protection area under the regulation of the “Campoalegre” Soil Conservation District. This District is located in the Department of Risaralda, jurisdiction of the Municipality of Santa Rosa de Cabal and covers a total area of ​​21228 ha on the western slope of the Central Mountain Range between 1800 and 3600 meters above sea level, in the buffer zone of the Los Nevados Natural Park, occupying 37% of the Municipality of Santa Rosa de Cabal. Hapalopsittaca fuertei occupies only a small range within this Park which was created primarily to protect the human water supply and prevent soil erosion rather than to protect the flora and fauna.

Fuerte’s parrots show a marked preference for a species of mistletoe (Antidpahne viscoidea) and the population is much more active in the months of Febrary/March and November/December when the plant is fruiting. In the sector where the Lorito de Fuertes species is found, habitat destruction and deforestation around the monitoring sites belonging to the Cortaderal farm and others in the surrounding area has been noted. In addition, many of the trees that are the hosts of this parasitic plant, food of the Lorito de Fuertes, are very old and in poor condition, possibly due to the impact of the mistletoe. Any tree regeneration has been limited by the activities of the farm owner who continues to fell and clear, thus reducing further the habitat for the parrot. Within the project we carry out actions to prevent further deforestation by talking with the community and with the owners of the farm where the parrots live. Political and administrative steps were also taken to find a new way of regulating, publicizing and generating  a culture of protection around the species. As part of this initiative, the Local Council declared Fuertes's Parrot the emblematic bird of the municipality on December 6th 2019 and a mural dedicated to the bird in Santa Rosa de Cabal was inaugurated on December 30th 2019. 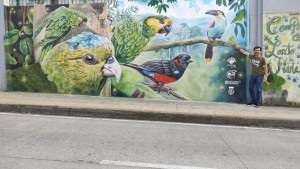 We have also been acting to protect the parrot from illegal hunting or trafficking by promoting measures to control and monitor the entry of visitors to the Cortaderal Farm area. We continue to reach out to the owners of the farms in the area, to the community in general and to local tour operators.

His conservation proposal was as follows:

PROPOSAL FOR THE PROTECTION OF FUERTE’S PARROT IN THE AREA OF SANTA ROSA DE CABAL, RISARALDA, COLOMBIA

– Action: Search, monitoring, follow-up and counts of individuals throughout the La Linda, El Placer, Cortaderal and El Porvenir areas, which is where the species has been frequently observed.

- Action: Acquisition of four walkie-talkies for the search and counting of individuals.

Promote the availability of food for the species and avoid deforestation

- Action: Increase the production of Myrcianthes rhopaloides seedlings, (arrayana guava) creating more seedbeds for the germination and planting of one of these nutritional plants

- Action: Reforestation on the roadsides with the seedlings produced to continue with the formation of living fences and thus avoid the tree-felling carried out for fence construction.

Monitoring of the nesting period

- Action: Permanent monitoring of the activity of the species in artificial nests.

- Action: Acquisition and operation of five (5) camera traps to observe the activity of the species in artificial nests.

- Action: Acquisition and operation of a drone for surveillance from the air of the forests that are being deforested, in addition to obtaining coordinates, measuring areas and mapping the areas where individuals have been observed. Also, for taking videos of the area from the air.

Obtaining records such as temperature and relative humidity of the area

- Action: Payment of transport for trips to the field work areas

- Action: Acquisition of batteries and memory cards for the operation of the equipment

To that end, trustees of The Parrot Society UK agreed the sum of £2,455 from our Conservation Fund towards the purchase of camera traps and surveillance, to help with this worthwhile project. We look forward to future updates and progress in this area.

Two parent birds at nest entrance, with two chicks inside - 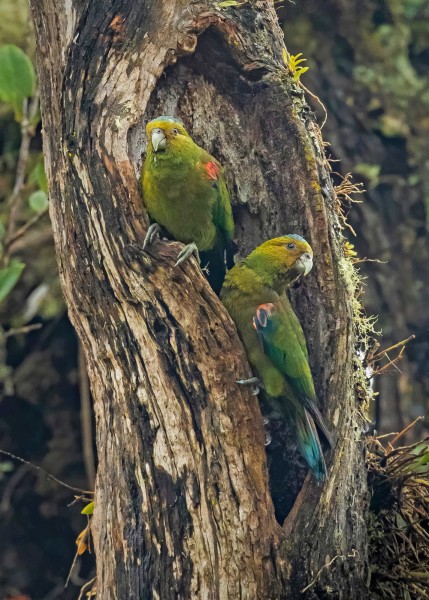