As one would expect, the Buru King Parakeet is found on the island of Buru, situated in the Banda Sea, mid-way between Sulawesi and New Guinea. The island measures only 80km x 60km and is both mountainous and tropical in nature, being still dominated by primary jungle. The population of the Buru King is assessed as being broadly stable, the human population of Buru has been relatively slow to increase and 2 significant forest reserves exist, in addition the remote nature of Buru has limited the trade in wild caught birds to Indonesian bird markets. 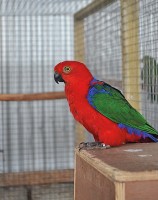 As most readers will be familiar with the Australian King Parakeet I shall use this species for comparison.
The Buru King is somewhat longer and more slender than the Australian King, perhaps marginally shorter than the largest Amboina Kings but with a sleeker more upright body shape. The general body colour is a deep velvety red, darker than both the Australian and Amboina and more akin to the Green Winged in vibrancy. The wings are dark green and the long, broad tail is dark blue with a little pink edging on the underside. The most obvious distinguishing feature of the Buru is the solid black beak.
The cock is distinguished from the hen by a broad patch of almost iridescent blue feathers across the mantle, a slightly lighter red colouration and a heavier more masculine head shape. By contrast the hen has only a smattering of lighter blue feathers on her back, a deeper almost maroon colouration and a more feminine head shape. Buru Kings have a bright golden iris, which is seen to great effect when the pupil dilates and constricts during courtship.
Immature birds are similar to the adults, but have a slightly shorter tail and a pale colouration to the beak, which darkens over the first 12 months. Sexing of immature birds is difficult; as such DNA testing should always be used.
I have found my pair of Buru Kings to be very steady and will take small food items from my fingers through their aviary wire; in addition I find them slightly more active than Australian Kings and possibly Amboina Kings.  Whilst I have not experienced it, at least one continental breeder of Burus has found some of his pairs to be quite aggressive towards each other, with cock birds repeatedly chasing their mates for no apparent reason.  This reporting of aggression by some breeders and not by others is mirrored with Amboina Kings. 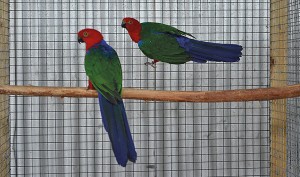 The Buru King first appeared in UK aviculture during the very late 1960s when very small numbers - literally ones and twos - were occasionally found amongst consignments of Amboina Kings which were imported into the UK by Jim Hayward of Carterton Aviaries. These rare finds amongst the still rare batches of Amboina Kings continued on a sporadic basis over perhaps 8 years. Despite a handful of dedicated breeders having some success with the Amboina Kings, the Buru Kings were apparently even more fragile and few survived importation. Of the 3 or 4 Buru Kings which were successfully quarantined and acclimatised, a pair eventually came into the hands of Cornwall based aviculturist Peter Paris, and in 1978 Peter was rewarded with the first UK breeding of the Buru King and what was likely the first breeding of the sub species ever in captivity. Unfortunately Peter’s success was not repeated and the Buru King seems to have disappeared from UK aviculture shortly after.
The situation in continental European aviaries is less clear, though it seems that a handful of Burus reached private breeders in the Netherlands and Walsrode Bird Park in Germany during the 1980s and 1990s. The fate of these birds is unknown but survivors may have contributed to the small nucleus of birds found in Germany and what is now the Czech Republic in more recent years.
Finally, just prior to the cessation of imports of wild caught birds to the EU, several very small batches of Buru Kings arrived in Switzerland, Germany and Denmark. These birds came in from bird breeding centres in South East Asia and were possibly a mix of both captive bred and wild caught birds.
The numbers of Buru Kings has slowly increased in European aviculture over the last ten years, with several breeders now doing well with the birds in both Denmark and Germany.

My adult pair of Buru Kings is housed in a flight measuring 15ft long, 3ft wide and 7ft high. Whilst the flight is constructed of 1 inch x 1 inch 15 gauge mesh, I am confident that Burus would not be destructive to 19 gauge mesh. Their flight is timber framed, set on a concrete base and built entirely under cover, though one end is open to the elements. The birds have no additional heating or lighting provided. The aviary is fitted with a simple sprinkler/mister which is greatly enjoyed.

Buru Kings are likely to start to become sexually mature at 3 years of age, my pair consisting of a 2016 German bred cock and a 2015 Danish bred hen, had shown no signs of breeding activity until 2019. Both Amboina and Green Winged Kings, as tropical species can be inclined to breed at any time during the year and Burus are no different. However, I have done my best to try and induce spring through autumn breeding by influencing breeding condition through diet, beginning in mid-March. In order to induce breeding condition I begin feeding soaked seeds, both their normal parakeet mix plus both wheat and mixed pulses, which is drizzled in wheat germ oil prior to feeding. In conjunction Nekton vitamin E is introduced to drinking water, Spinach and Dandelion are fed in quantities and the daily allowance of both Mealworms and Wax Moth larvae is increased. The regularity of soft/egg food feeds is also slowly increased. My egg food mix is made up of 50:50 Haith's Nectarblend (traditional egg & biscuit mix) and Haith's Prosecto (soft bill mix), to which I add a little whey protein powder, natural bee pollen granules and Nekton MSA minerals, plus defrosted frozen peas, sweetcorn, grated carrot and any spare hardboiled hens eggs (shells and all).
Two nestboxes were provided, one 4ft ‘grandfather clock’ type and one only 3ft deep, both containing a few inches of 50:50 soft wood chips and rotted Birch wood. In both instances the boxes were set reasonably low in the aviary in order to allow the adult birds to sit on top of the nest boxes. The deepest box was preferred and the hen began ‘digging out’ from late March onwards.
Over the first few weeks of early spring, dominance within the pair transitioned from the hen to the cock. The hen now often sat low on a perch begging to be fed, which the cock bird did with gusto. This was then followed by the cock treading the hen with equal gusto, often for prolonged periods of up to 3 minutes. At this stage I withdrew the vitamin E from the birds’ drinking water and replaced it with Vetark Zolcal Calcium & vitamin D. The hen then began to ‘rump up’ and spend an increasing amount of time in the nest box. Unfortunately at this time we experienced some very cold days and nights, brought about by a north easterly wind and the hen looked ‘uncomfortable’. At this stage I began to fear that the combination of a young hen and cold weather would result in egg binding, thankfully this was not the case and the first egg was deposited in the nest box.
Due to work commitments and a desire to not disturb a young and inexperienced pair of birds, I did not check the box for some weeks after the second egg was laid.  When I finally did so I was shocked to find a total of seven eggs present under the hen who continued to sit tight, unfortunately it was immediately apparent that only two of the seven were fertile due to their dark, chalky, opaque appearance compared to the pinkish, semi translucent appearance of the remaining five. Whilst I have no way of proving it I believe that due to the earlier cold weather the cock bird had failed to mate and fertilise the first eggs, but that the hen had continued to lay, perhaps instinctively, resulting in a split or double clutch, with the fertile eggs laid last. It must be pointed out that the normal clutch size for the nominate Amboina King is between two and four eggs, with this also being the case for Buru Kings.
In due course the two eggs hatched and the quantity of both soft/egg food and live food was slowly increased. The adult pair proved model parents and no problems were encountered in rearing the chicks. Size S closed rings, from Avian ID, were fitted as per all my Kings. The young fledged on consecutive days and neither then returned to the nest box. Feather samples from both chicks were taken whilst still in the nest box and then despatched to Avian Biotech for DNA analysis, which later revealed a cock and a hen.
The youngsters remained with the parents until September, with no problems with aggression being encountered. During the same month the adult hen once again began to beg for food, but the cock showed no interest in going down to breed again. At this stage the young were removed from the aviary and paired up with an unrelated 2018 hen and a 2019 cock, obtained from a German breeder this year, both in separate breeding flights.  As such, I hope to build up a small breeding nucleus of 3 or 4 pairs of Buru King Parakeets within the UK, following this year’s success with what I believe to have been only the second successful breeding of the Buru King in the UK. 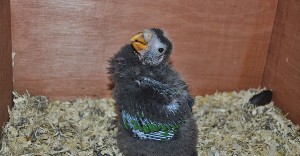