Dave Dickason, who runs the Parrot Society's Reunite register of lost, found and stolen parrots, gives us the following report early in June -

Three good results recently with lost birds being reunited with their owners.

The first bird was Grumpy an African grey parrot who escaped in April. Oliver the owner contacted me late one evening he was distraught at losing his bird which has been bonded with him for over ten years. I advised Oliver not to give up hope and to keep calling and looking for Grumpy (generally African Greys do not fly too far away).

Oliver went out looking relentlessly and within a few days he found Grumpy in a tree not too far from where he lives.

They called each other, Grumpy wouldn’t leave the tree and stayed another night . Grumpy flew down to Oliver the following day. They were both so happy to see each other.

The second success story involved some investigation on my part. I was contacted by Scott who had found a pineapple conure whilst out looking for a pineapple conure he had lost. On catching what he thought was his missing conure he realised it wasn’t his. Scott contacted the Parrot Society and asked if we could help in tracking the owner.

From the ring number given I was able to find the breeder. The breeder concerned was exceptional and kept records, he knew who had collected the bird amongst others two years previously. I then made enquiries and traced the person who had bought the birds, when I made contact the gentleman who is a Parrot Society member informed me he had given up bird keeping and had sold his birds on. He very kindly contacted the person he had sold them to and they contacted me, informing me that they had sold a pair to a lady who had messaged them on Facebook to say she had lost one. I contacted the lady concerned, Sam, and put her in contact with Scott. It was her missing bird. One of a pair and the other had been pining badly missing his mate.

They called to each other and immediately cuddled up together.

The one which was missing is on the left

More good news was another African grey parrot called Ruby who was out one evening wearing a harness which was tied to a branch. Ruby was startled and flew off, the harness came undone, and a distraught Dave the owner saw her fly over a building and disappear in to the distance. Not knowing what to do Dave contacted a friend who gave him my number. I advised Dave not to give up and told him about the other Grey called Grumpy who had recently been reported missing and been found a few days later by her owner.

Dave spent hours touring the area looking for Ruby looking in tall trees and calling for her. Then after a few days a lady knocked on his door and told him there was a parrot in a tree about 60 metres from his home. Dave made his way there and saw Ruby caught by her harness high up in the tree. The fire brigade attended and said it was too dangerous to climb the tree or put a ladder up. So Dave got a long piece of metal pipe, bent over the end, climbed on the roof of his van and broke the branch which allowed Ruby to fall.

Unharmed Ruby has now been reunited with her owners. Dave, his wife and children were so pleased to see their pet safely back home. Speaking with Dave about the ordeal he said that people who have parrots don’t appreciate them until something like this happens, his whole family are now a lot closer to Ruby. 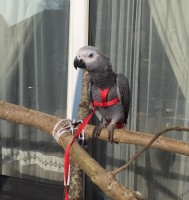 Three good results recently with lost birds being reunited with their owners!