More details of the Latest News 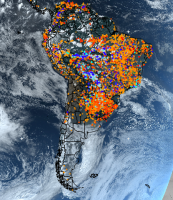 Hundreds of major fires are burning throughout the Amazon rainforest. This massive area is ecologically, economically and environmentally important to the whole planet. The loss of endangered wildlife - especially parrots - must be beyond imagination. And just what effect will it have on this project?.......

Today, the 7th of June 2019, the strongest message yet, that the Spix’s Macaw will be returned to wild, was delivered to the world.

Representatives from ACTP, Pairi Daiza Foundation and Parrots International met with the Government of Brazil to sign the most significant of contracts; the contract that guarantees the return of this small blue macaw to its home, in the Brazilian Caatinga.

There have been many reports in world media making various claims about the newly elected Brazilian Government’s apparent lack of interest in the protection of the environment and the endangered species that call Brazil home. Today the Government has shown that they are fully committed to the Spix’s Macaw De-extinction Project, making this conservation program a main priority.

The 7th of June 2019 will be remembered as the day that the agreement to bring the Spix’s Macaw back to the wild, was confirmed.

The first 50 Spix’s Macaws will arrive in Brazil at the completed Release Facility by the end of 2019. With a planned first release to take place soon after. 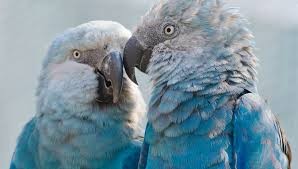 But then see the worrying news that the new President of Brazil, Jair Bolonaro, has no sympathy for conservation projects, but does support industrial-scale destruction of the rainforest for farming, logging and mineral mining. One wonders what the end result will be! Destruction of Amazonian Rainforest