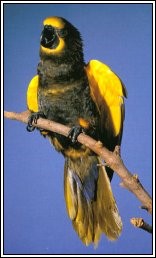 Of more than 300 species of parrots, only one has a colour scheme of brown and yellow. Duyvenbode's Lory, Chalcopsitta duyvenbodei, is unique in this respect. In adult birds the entire undersides of the wings are brilliant daffodil yellow. To my eyes this is an extraordinarily beautiful bird and I have never been able to understand why it is not more sought after. Two other features of its plumage are especially beautiful: seen head-on, yellow totally encircles the beak and forehead; also, the contrast of violet or deep blue on the lower back, rump and under tail coverts. The streaked, spiky feathers of the nape are also notable. It is the same size as the other Chalcopsitta species, 31cm (12inch) and weighs about 215g. Plumage is the same in male and female.

In ornithological literature it is sometimes called the Brown Lory. Over the years there has been confusion about the spelling of its common and scientific names. This species was named after C.W.K. van Duyvenbode, with a y, not an i. The misspelt version with an i may have originated in the Check-List of Birds of the World, volume 111 by J.L.Peters, published in 1937. The now rare Sunbird, Aethopyga duyvenbodei,) from the island of Sanghir (home of Eos histrio) was named after the same man.

One sub-species, syringanuchalis has been named, but is doubtfully distinct. It is said to be darker on the head and back and that some specimens have a violet sheen. A wild caught mutation was obtained by Patrick Tay of Singapore in 1939. Most of the areas which are normally brown, except the mantle and wings, were green. Rump and under tall coverts were iridescent blue.

Not a lot has been recorded about the wild life of this species, which comes from the northern, mainly coastal, areas of New Guinea. It is not one of the common species, found in large flocks, but occurs in pairs or small groups. Apparently patchily distributed at low elevations, it inhabits forest and tall secondary growth. No description of its nest has appeared in the literature, to my knowledge.

Probably the first specimen to reach England was the one presented to London Zoo in 1929. From that time until 1973, when commercial export from New Guinea commenced, the species was rare in aviculture. Its numbers then increased with importation and breeding, but are now declining. Although it is established in Europe, South Africa and the USA, I am concerned for the long-term survival of this beautiful bird in aviculture. It needs more devotees.

History of one pair.

Duyvenbode's has always been one of my favourite lories. I find its coloration and its personality extremely attractive. Between 1973 and 1978 Bob Grantham and I acquired nine birds - all, of course, newly imported. We were not alone in finding that the mortality rate within a few months of importation was high. Sad to say, only two of these birds survived for more than five years. A male and a female, this pair became the first to breed in the U.K., in 1983. Or perhaps it is more accurate to say no one else had reported breeding them by then although in the next couple of years a number of successes were reported. At the time of writing this pair was still with Bob Grantham, in the same aviary, with the same nest box! In 1997 their young one of one year old was still with them, which, of course, prevented them from breeding. After it unfortunately escaped from the aviary, the pair nested at once and had a chick which died before it was feathered. They nested again immediately and hatched two chicks. At that time they were at least 20 years old. All the imported birds were fully adult so they could be considerably older than 20. They are kept in an outdoor aviary measuring 2.1m (7ft) long, 91cm (3ft) wide and 1.8m (6ft) high. The nest box measures 23cm (9inch) square and 54cm (21inch) high. Incidentally, after some years, both members of this pair started to say: "What are you doing?"!

Although this pair has done well in a small aviary, to truly appreciate the beauty of Duyvenbode's Lory in flight, one needs to see them in an aviary 3.6m (12ft) to 4.5m (15ft) long. Only then are the yellow under wing coverts seen to advantage. The best floor covering, in my opinion, is small pebbles. This is easily hosed or pressure washed to keep it clean. Feeding and nest inspection should be carried out without having to enter the aviary. 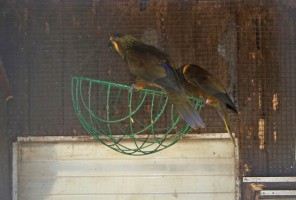 A playful pair of Duyvenbode's lories at Birdworld, Surrey (AKJ)

Duyvenbode's is primarily a nectar- and fruit-eating species. In my experience it is less adventurous in its diet than the Yellow-Streaked, for example. Apple, pear, grapes, banana and orange (and in the Canary Islands, cactus fruits and guavas) are readily eaten. Some will take fresh corn, others refuse it. I offered a dry food to one pair but they showed no interest in It. A liquid food, offered fresh twice daily preferably, should always be available.

I would recommend the purchase of young, unrelated captive bred birds, which have been DNA sexed, by anyone interested in breeding this species. Although they take about 2.5 years to mature, it is better than buying birds of unknown age and history, in my opinion. The male normally has a slightly larger head and beak than the female but unless one is very familiar with this species, a positive method of sex determination is recommended.

Prior to breeding, they become noisier and males become slightly aggressive, threatening anyone in the vicinity by bobbing up and down with the wings held partly open. Females spend increasing periods in the nest but some females have the habit of leaving the nest when someone is in the vicinity. Unless the nest box is checked regularly the start of incubation could be missed. The clutch consists of two eggs which hatch after 24 to 26 days. Some females apparently do not incubate on the day the first egg is laid.

Newly hatched chicks weigh about 8g. They have quite long white down on the upper parts but are sparsely covered in other areas. The bill is dark brown with a white egg tooth. Young are ringed with 7.5mm rings at about 16 days. After the chicks are two weeks old, the nest litter (wood shavings) will need to be changed frequently, at least once a week. The frequency depends on how liquid the liquid food is! If this task is neglected, the parents are likely to pluck the young, and whether or not they are plucked the young will be very susceptible to chilling, leading to their death. Young which hatch in Europe during the cold months of the year in outdoor aviaries must be removed for hand-rearing by the age of one week, if they are to survive.

Young leave the nest when aged between ten and 11 weeks. I prefer to leave young with their parents for a minimum of two months, even although they may be independent after two or three weeks. Even if they are left much longer the parents are good natured and not aggressive towards them. I believe that we are usually in too much of a hurry to remove young from their parents and that the benefits from leaving the family together for a while are great. I suspect that such young are more likely to make successful breeding birds. They can learn a lot from their parents.

It is not advisable to hand-rear single chicks intended for breeding, unless they can be placed with other young Chalcopsitta lories to mature. Young Duyvenbode's easily become imprinted on the rearer. They are exceptionally affectionate and seem to crave human company, whether or not they are reared with other lories. Many are slower to become independent than lories of other genera. They might start to feed themselves at seven weeks and might be independent at nine weeks, or independence might take longer to attain. Much depends on the circumstances. They are much more sensitive and dependent than, for example, Trichoglossus species, and weaning them too early could have serious results. Even when young (at Palmitos Park) were removed from the hand-rearing room and placed in suspended cages, I would take them warm rearing food early in the morning, as well as nectar, for several weeks. They seemed to need it, and enjoyed the continuing contact with the person who reared them.

Although I would not normally recommend Chalcopsitta species as pets, with a caring owner who is truly committed to the bird, their beauty and affectionate nature recommend them for this purpose to the person who understands what keeping a large lory entails. Females, with their more gentle nature, would make adorable pets for anyone who can tolerate their harsh and fairly loud calls. I do not think that the liquid nature of their faeces is a problem. This is easily overcome by keeping them in a 1m (39 inch) long mynah cage, such as that made by Terenziani. This contains all the faeces and is very easy to clean. However, a lory kept in this way needs to be let out once daily for exercise. Plenty of toys for amusement are essential.

However, no-one should buy such a bird as a pet with the intention of pairing it up at a later date. It would probably be too imprinted. Lory breeders have to think of finding new outlets for their young if lory breeding is to survive. However, It must be pointed out, that Duyvenbode's is NOT a species which can survive on a dry diet. Nectar makes up about 60% of its diet. To promote this as a species which needs a minimum amount of nectar would be totally wrong.

I wonder how many readers of this have never kept Duyvenbode's? They are missing out on a wonderful bird.