Calcium is a mineral required by all animals as an essential part of their diet, along with other elements such as Phosporus, Magnesium, Potassium, Sodium, Iron etc.
Disease conditions caused by a deficiency of Calcium (or more usually an imbalance of Calcium and Phosporus, together with a lack of Vitamin D) are very common in captive parrots.

Calcium compounds are familiar in nature as relatively hard minerals such as chalk, limestone, cuttlefish bone, eggshells and oyster shell.
The mineral in the body is incorporated in the structure of the bony skeleton and in the production of egg shells - perhaps its familiar manifestation, but it also has an important unseen function in solution in the bloodstream in the proper contraction of the muscles.

Bone and shell structure depend on a combination of Calcium and Phosphorus in the right ratio; and the uptake and assimilation of Calcium is also linked to the availability of Vitamin D3. The best way to provide this is natural sunlight, enabling the bird to manufacture this vitamin in its skin. 15-20 minutes daily is very beneficial, but make sure your bird is not put out in the hottest part of the day - ie 11 am - 3 pm. Alternatively you could use a pet-safe ultraviolet lamp indoors.
If a bird has insufficient Calcium available, then the symptoms seen can be many and variable, depending on the bird's age and sex, and the degree of the deficiency.
A low level of Calcium in the bloodstream (this may be measured by taking blood samples from the vein of a bird) is known as HYPOCALCAEMIA.
The reverse, too much Calcium, would be Hypercalcaemia.

Hypocalcaemia occurring in an adult breeding hen bird may in the first instance produce Infertility - in that the hen is unable to develop eggs.
If she does produce eggs, they may be soft-shelled, which makes them difficult to lay and unlikely to survive. 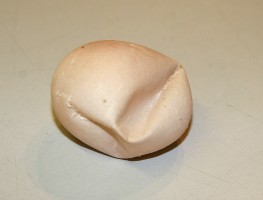 The next stage would be egg-binding, when an egg becomes stuck in the oviduct. This is a common problem, and may also be caused by immaturity of the bird, debility after laying eggs, or a change to cold and damp weather conditions after fine weather. However, as mentioned previously, Calcium is essential for proper muscle contraction and a mild deficiency will mean that the oviduct cannot contract properly to expel the egg. The treatment of egg-binding includes the provision of heat to the bird, encouraging fluid intake by adding honey or glucose to the water, lubrication of the vent and the administration of Calcium. One usually gives an injection of Calcium solution, together with Oxytocin, the hormone which aids in giving birth. 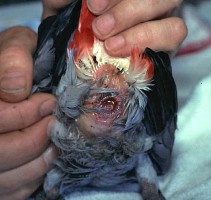 An egg-laying hen has a tremendous demand for Calcium, and if this is not supplied in the diet, then reserves laid down in her bones will be withdrawn to go to egg production.
This will result in brittleness of the bones showing as stiffness or weakness, and the possibility of bone fractures.

Provided enough Calcium has been available successfully to produce an egg which subsequently hatches, then the next stage for Hypocalcaemia to strike is in the developing chick. The early nourishment of the chick depends on nutrients contained in the yolk sac, and subsequently that provided by the parents, and if the hen has inadequate Calcium reserves then the chick also will not receive enough. Its growth will be slow and stunted, and the usual effect is that the growing bones are soft and poorly mineralised. As the chick gets heavier, the long bones of the legs and wings bend under the strain - so-called "Rickets", better described as Metabolic Bone Disease (MBD). 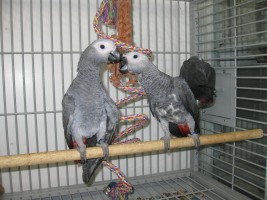 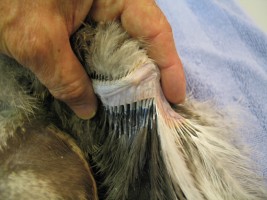 Such a condition will also occur in a hand reared chick, even if the rearing food contains sufficient Calcium. This is because it takes a while for the chick to assimilate the mineral from its food, and meanwhile the rapid growth rate coupled with the poor supply from the yolk will still produce bone deformities. Treatment involves proper supplementation thereafter, but once curvature has occurred the bone will not straighten again by itself. Severely deformed limbs will require expert veterinary attention when the bird is old enough, to break and reset the bent limb. 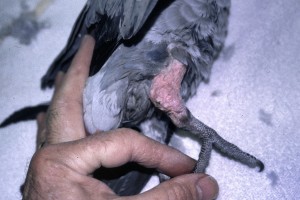 Mal-union fracture in a young AGP following MBD. The feathers have been plucked from the leg to show what appears to be a right-angle joint, but is in fact a healed fracture of the leg bone, set at an angle. This will require corrective surgery.

Finally, in the adult bird, we have another common manifestation of Hypocalcaemia in the form of nervous symptoms.
These can occur in any species, but usually they are found to some extent in Eclectus Parrots, and very commonly in the African Grey species. African Grey Parrots appear to have a particularly high demand for Calcium, or perhaps they have more difficulty than other birds in metabolising what is available. As mentioned before, Calcium is required for proper muscle function, and when blood levels are low, we see signs ranging from slight muscle weakness, so that the bird has difficulty climbing around its cage, progressing through more marked inco-ordination and loss of balance, and culminating in fits or seizures of an epileptic nature.

The usual reason for the occurrence of Hypocalcaemia is a chronic deficiency in the dietary intake.
Classically, the condition is seen in parrots that eat a diet consisting of sunflower seed and peanuts, with little else.
African Greys particularly can become addicted to sunflower seed, and can be very difficult to persuade to eat alternatives.
Calcium-rich foods include the dark greens such as broccoli, watercress, spinach, kale and the like; fruits and nuts such as oranges, dried figs, cooked chick peas, sesame seeds, brazil nuts; toasted bread; and dairy products such as cheese, milk and yoghurt. Calcium is usually offered in the form of cuttlefish bone, mineral blocks, or oystershell grit, but these products have some disadvantages. Many birds will not touch them, or if they do, tend just to destroy the substance without ingesting it. Even if they do eat cuttlefish bone, the form of Calcium available is poorly digested - perhaps only 2% of that taken in is absorbed into the bloodstream.

The dairy products are much more efficiently digested, and milk can be a very useful means of providing Calcium quickly in an emergency. Their disadvantage is that the fat content and the lactose sugar are not easily digested, so long term administration can produce diarrhoea.

Various powdered vitamin and mineral supplements are available, but use those produced specifically for avian patients rather than dogs, cats or humans. Powdered supplements are better for long-term maintenance use, as they will not have an immediate effect in an emergency situation, unless soluble in water, or given in moist or sticky food which the bird will eat. They will drop through dry seed, unless the seed is coated with oil. Soluble Calcium supplements administered in the drinking water are perhaps more immediately beneficial.

In an acute case of seizures or egg-binding, the only satisfactory treatment is the administration of Calcium by injection from a veterinarian, in which case the results obtained are usually rapid and dramatic.

Always remember that Calcium given orally will block the absorption of Tetracycline antibiotics, so the two drugs should not be used together. Veterinarians and breeders need to be more aware of the prevalence of this condition, and its prevention by the provision of an adequate diet or of Calcium-rich supplements.