Following the success of the 'tree tinning' project, we announced in September 2018 that ongoing financial support from the Parrot Society's Conservation fund has allowed Ray Ackroyd to produce a batch of artificial nest boxes to increase potential cockatoo nesting sites. Following disastrous fires and prolonged drought in 2017 and 2018, many existing trees have disappeared. 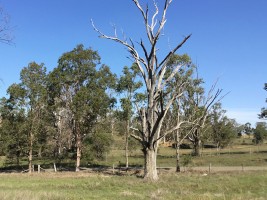 A dead tree, which could provide one or at most two nest sites for cockatoos

Ray has constructed nest boxes from dead trees, thereby creating dozens of potential sites from one tree, that left standing would house no more than two pairs of birds - 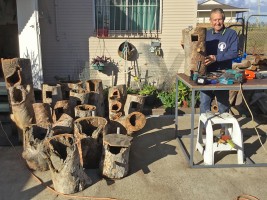 - as well as making 'conventional' artificial boxes from sawn timber - 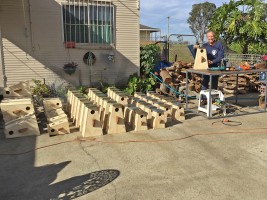 Ray tells us that the unusual (to British eyes) A-frame shape of the boxes is to reduce the amount of roof that exposed to the sun. An important consideration when temperatures regularly reach 40 degrees C or more! With these birds' breeding season fast approaching, Ray is working hard to get these boxes distributed and mounted.

November 2018 Update: Ray reports that more than 50% of the nest boxes that have been sited and mounted are already occupied by Cockatoos and other parrot species, an excellent result!  He says in a message to the Parrot Society that "No doubt with all the land clearing they were fairly desperate to get a nesting site. Thanks again to PSUK for allowing that to happen".

May 2019 Update: Ray reports that "There can be no dispute that the funding by the Parrot Society UK to construct nesting boxes for the above species, considering that their original old growth nesting trees have been destroyed, is money well spent and is working very well as the pictures clearly indicate. A lot of the local old growth trees have been bulldozed down to make way for housing development in South West Sydney." 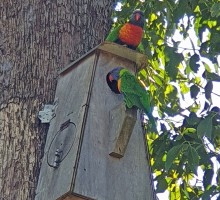 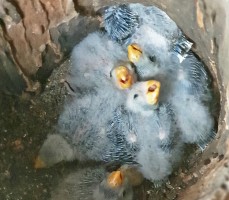 Rainbow (Swainson's) Lorikeets checking out a nest box; Chicks in a box

"The PS nestbox project is isolated away from any other so called nest box programmes here that other organisations are trying. Quite frankly ours work - theirs don't and the reason is that their field knowledge doesn't guide them to erect them in the correct places. Our boxes are busy at all times and the pairs continually come back to check out their nest sites. I continually have problems with Indian Mynahs and starlings and unfortunately for them I have to net and destroy them. That is legal here for those pest birds". 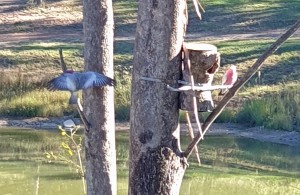 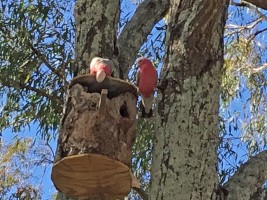 January 2020 Update: Following the disastrous bush fires and extensive loss of habitat and wildlife that we have all been watching on our TVs, we sent a message to Ray Ackroyd asking how thins were, and if there was anything more we could do to help. This was his reply -

"I really don’t think anybody can envisage the loss of wildlife. You are certainly correct when you say it will take many years to recover.  The first thing that fire enjoys is hollow trees and hollow branches. There will be concern in relation to Swift Parrots who migrate up to our South Coast during our Autumn to feed on Nectar, Pollen and Lerps from the very trees that are now severely burned. This year's fires may have a massive impact as to the future of the limited wild population of Swifts.
Apart from the fires and smoke the summer temperature here has been extremely hot. Most of the days from Christmas onwards have been in the 40s. The 4th of January along the Coast was excessively warm with Western Sydney getting a reading of 49.5c. Aviculture has had some big losses and outer Sydney Poultry Farms had substantial losses.
I have been talking to a number of  Bird Societies and they have already put the wheels in motion regarding erecting nest boxes in areas affected by fire. These Societies are now in talks with Government Departments and will no doubt receive funds to support the cost of constructing nest boxes of various sizes. These will undoubtedly follow the pattern that was set by the PSUK when you funded me to implement the nest box programme for parrots under the stress of losing their breeding trees.
No doubt they will erect the boxes in areas around the towns ie:- Golf Courses, Reserves and School Grounds where they can be monitored. It’s a big job, but it can be done.
The Societies work with The Men’s Sheds and they are a group of dedicated retirees who enjoy doing work such as carpentry for Charity. Certainly these men get a lot of personal satisfaction assisting those in need of help. The local Men’s Shed have already constructed some 500 boxes. I have already donated a lot of material for the construction of those boxes.
On behalf of the Australian people I would like to thank the Council and the members of the PS UK for their concern for our wild bird populations due to the ongoing fires. There is already substantial funding forthcoming to our Bird Societies, however I will let it be known particularly to our NSW Avicultural Society of your concern and offer to assist.

No doubt you will want to be continually advised on the programme and I will do that for you.
Kind Regards to all. 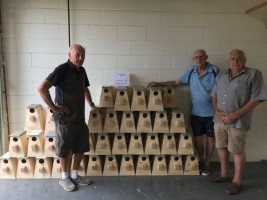 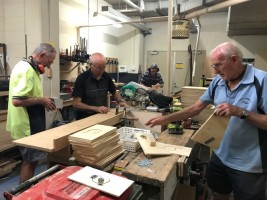 Just a few more things before I conclude. Some ecologists have recently stunned people by estimating that up to 1 billion animals perished in the recent South Coast Fires. I find that greatly exaggerated when in fact no study at all was conducted. Perhaps those statements are used to drum up funds for future research that seldom finishes. It was also stated that many species such as Koalas and Glossy Black Cockatoos could be extinct by as early as 2050. Both those species have a huge range in Australia and extinction is not going to happen. (Editors note: the Glossy Black Cockatoos present win Kangaroo Island are in fact the sub-species Calyptorhynchus lathami halmaturinus, which is NOT found on mainland Australia).
In respect to funding for the victims of this fire. I would have to say the Australian public are extremely generous when it comes to assisting those in need. To date, $AS 750 million have been donated to various organisations to distribute to the victims of the fires. History tells us that the poor souls suffering the force of that fire will only receive a small percentage of that funding. Also many other so-called carers put out their hands for funding and blag the community with absolutely no expertise. Our Government needs to address this issue as a matter of urgency, otherwise donations from all areas may in the future be extremely limited to assist those in need.
Finally, and I have mentioned this before: Over the years there have been 57 Government inquiries into fire management. These enquires entail - fire management practices, hazard reduction burns, well-maintained fire breaks (particularly in National Parks), and most importantly water storage to address fire prone regions. Despite the deaths of many people and the loss of millions of dollars-worth of property and livestock these Committees never conclude and they fail miserably to understand the basic principals of the management of our Environment and fire prevention techniques. Like my old man used to say, "Only fools ignore the lessons of the past ".

Well, that's about all I can outline for you re this fire. Unfortunately it is wide ranging and does take a bit of explaining. Over the next few days I will e-mail you further excerpts to add to this one.

My very best Regards to you,  Sincerely Ray Ackroyd .