Collecting Parrot Feathers for Ceremonial Use by Native Americans

The Parrot Society UK will act as a collection and processing centre for moulted parrot feathers to send out for use by Native American people in Central and South America in their traditional ceremonial costumes. Such action will considerably reduce the killing of parrots in the region solely to harvest their feathers, as well as the illegal trade in such feathers. We are looking particularly for feathers from Macaws and Amazon species, but several other species are suitable (see below). Feathers from birds of prey or wildfowl are not acceptable. The Society will check the quality of submitted feathers, and subject them to the required heat treatment, and then package them according to official Defra requirements to send to the organiser Steve James in North America. 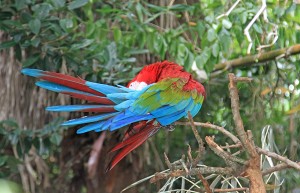 Steve writes on his website -"The “Feathers for Native Americans” project is a passion that I have of collecting moulted Macaw and other Parrot feathers and gift them to the Puebloan Tribes of Arizona and New Mexico to use in their traditional religious ceremonies, to adorn their ceremonial dance garb and to use along with their spiritual artefacts, at no cost or obligation on their part! We are looking for dedicated and sincere bird owners or custodians of birds that will commit to donating their moulted feathers, to assist Native Americans in their right to express their rich cultures and traditions and in a small way help save Wild Macaws and Parrots.
By gifting moulted Macaw, Parrot and other exotic bird feathers, we can eliminate sellers of illegally imported feathers from Central and South America, that are hunting and killing wild Macaws and Parrots for profit. Every feather donated from a moulted living bird will replace one that a wild Macaw or Parrot was killed to supply the need. The moulted feathers are a natural and renewable resource that's eco-friendly and humane. There is no danger to the birds and they are highly preferred by the Native Americans. Native Americans have used feathers in their religious customs and traditions for the past millennium and will do so for the next millennium. Together we can HELP SAVE WILD MACAWS AND PARROTS and support Native Americans in maintaining their 1st Amendment rights under the Constitution and enable them to be able to continue their rich customs and traditions.
IMPORTANT NOTICE: FEATHERS FROM RAPTORS SUCH AS EAGLES AND HAWKS OR MIGRATORY BIRDS ARE ILLEGAL TO POSSESS. WE NEVER ACCEPT DONATIONS OR EVER HAVE THESE TYPE OF FEATHERS! Macaw and other types of tropical exotic birds like Parrots, Cockatoos, Cockatiels, Parakeets etc. are all acceptable. We never buy or sell feathers, they are always a gift."

So start collecting your birds' clean, moulted feathers NOW, and send them to us at The Parrot Society UK, Audley House, Northbridge Road, Berkhamsted, Herts HP4 1EH. Many thanks!