As outlined in a short history of the Parrot Society, The Parrot Society was founded in 1966, so 2016 marked its 50th anniversary. Throughout that year, the specially designed 50th anniversary logo marked this milestone, and celebrations culminated with a highly successful and well-received anniversary seminar at Chester Zoo in September. This event included some quality speakers and a wide range of subjects covered, such that all PSUK members should have the opportunity to benefit from the event. A series of articles summarising the content of the talks, with some pictures illustrating the event, appeared in our magazine over the ensuing months, and these are reproduced here.

The over-all theme of the seminar was Worldwide Conservation Projects in Birds. It would have been very easy simply to present a catalogue of projects involving different species, but our excellent speakers gave a variety of approaches to this subject, to keep the interest alive, and provoke thought and discussion amongst delegates. The well-known artist Eric Peake   compered the whole day in his inimitable fashion, introducing each speaker and keeping things running smoothly. 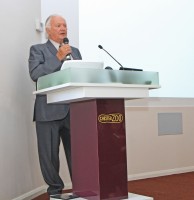 Eric Peake, our Master of Ceremonies

The proceedings were opened by the showing of a DVD produced by Ray Ackroyd in Australia, illustrating the use of protective collars (originally made of sheet tin, but now using clear Perspex) around trees used as nest sites by cockatoos in the outback. These slippery collars prevent predatory lizards, cats and snakes from climbing the trees to raid the nests of eggs and chicks, thereby markedly increasing the successful production of cockatoo chicks to fledging age. This technique was one of the first conservation projects to be funded by The Parrot Society in 1995, following a visit by Council Member and founder PS member John Mollindinia to meet Ray Ackroyd. This simple idea has been so successful that it has been copied by other conservation groups, and is still supported financially by the Parrot Society to this day. Sadly, owing to injuries received in an earlier accident, Ray was not able to travel and attend our seminar in person, but his film gave an excellent illustration of the collaring technique in action, as well as a taste of the habitat and wildlife of the Australian outback. This fascinating story, introduced by past-Chairman David Coombes, set the scene for the day, and showed the audience just what could be done out in the field, with a simple idea, limited manpower, and some basic equipment.

Eric Peake then went on to introduce a prestigious international selection of speakers for the rest of the day. First up were two keepers from our hosts, Chester Zoo, presenting some of the conservation projects with which the Zoo has been involved. Anne Morris, lead keeper on the parrot section, started with a talk about some of their earliest fieldwork in the late 1980s and into the 1990s to hand rear and release Echo Parakeets (Psittacula eques). Anne described how habitat destruction had brought this species to the brink of extinction, with a mere 20 or so individuals left in the wild in the 1980s. These parakeets were initially provided with nest boxes in the remaining forest, and later individuals were brought into purpose-built aviaries to aid breeding. Eggs were taken for incubating, or young chicks were taken for hand rearing, into a purpose-built unit, with strict hygiene control. All chicks were weighed regularly, and fed by tube and syringe. All were checked for external parasites – a common cause of chick morbidity in wild parakeets – and initially fed individually. As they grew and fledged, they were grouped together in crèche fashion to avoid imprinting on humans, before ultimately moving to an outside flight where they could see others of their own kind. Here they were still monitored by attaching small bowls of feed to weighing scales. The birds would land on the cups to feed, simultaneously registering their weight as they did so. The final stage was a soft-release aviary with feeding stations to which the chicks could return while they gradually explored the big wide world. Native plants were grown in the aviaries, or the birds’ natural food berries and fruits were ‘spiked’ in their flights, so that they would learn about ideal food sources.

A small bell was attached to the middle tail feather to monitor their movements initially. Some birds quickly removed this interference, but all were eventually lost at the bird’s first major moult, by which time all would be independent. Hopper-style feeders (to which the birds had become accustomed while in their flights) were mounted on posts around the site to ensure that all individuals would continue to receive adequate nutrition. Anne then went on to show the natural rain-forest habitat of these birds, with photographs of released individuals. She described how these methods had increased the population of free-living Echo Parakeets to 120+ breeding pairs at the last count.

Anne’s colleague Gareth Evans then took the stage to describe a recent survey on the Ecuador Amazon Parrot (Amazona autumnalis lilacina). This study followed DNA research carried out by Chester Zoo’s Director General Dr Mark Pilgrim, who was interested in the relationships between the various species and possible sub-species of this group of Amazon parrots. After 10 years of dedicated study, Dr Pilgrim was able to confirm that this parrot should be listed as a distinct species, and it was immediately classified as endangered by IUCN. The Ecuador Amazon is found just in a small area of dry forest habitat in southwest Ecuador, known as Cerra Blanco. The parrots roost in nearby mangrove trees, so the survey team staked out these roost sites in the early mornings and late afternoons, to observe and count the birds flying to and from their roost sites. Birds counted ranged from 40 to 140, mostly in pairs or threes. Allowing for the fact that some may have been nesting, a maximum number for the area surveyed was estimated at less that 200, so a truly endangered population. Trees were surveyed for possible nest holes in the area, and a follow-up survey is planned for early 2017.

Gareth went on to describe Chester Zoo’s attempts at breeding Amazona lilacina since the arrival of the first individuals in 1983. None were bred until 1996, following a change in nest box design. In the following year Mark Pilgrim set up a studbook for the species, and the Zoo acquired several individuals from various sources and gathered them together in a communal aviary. The parrots then selected their chosen partners, and these bonded pairs were set up in breeding situations at the Zoo or with other agencies. This technique led to a rapid increase in breeding success. Gareth continued by describing the current breeding aviary for these parrots at the Zoo, and we were able to see these for ourselves on the following morning’s guided tour. They are not highly destructive parrot species, so flights can be planted out to mimic their natural habitat more closely than is possible with many other psittacine birds in captivity.

The breeding cycle and feeding regime of these birds at the Zoo was described. Nutribird pellets, with pulses and fresh fruits and vegetables are given, presented in dishes mounted off the floor to prevent contamination by mice. Some chicks are taken for hand rearing, but most remain with their parents. A selection of fresh, bird-safe branches and foliage is provided for nutritional and psychological enrichment.

Following a few questions from delegates, this session was followed by a welcome coffee break, prior to the next presentation by Dr Mark Stafford, which continues on 50th Anniversary Seminar Part 2