A closed ring is a permanent ID ring fitted to a chick’s leg as a hatchling, this is generally done by the breeder. Two types are commonly used, Aluminium or Stainless Steel. (Plastic is also used in birds with less damaging beaks – see below) Rings are stamped with a mixture of numbers and letters which provide valuable information on a bird’s identity, and once fitted they cannot easily be removed. An example format would be 3 CAGS 20 V

Aluminium rings are generally sold in batches of 10. They are colour coded and produced with consecutive numbers.

In the example above: 3 would be the 3rd bird rung, CAGS could be the breeder’s initials or an organisations ID e.g. PSUK, 20 is the year bred, the year is commonly shown as 2 digits and V is the ring size (size V is used for African Grey Parrots). 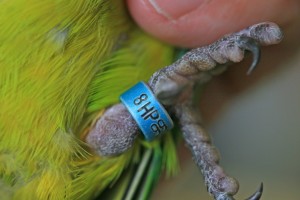 Stainless Steel rings can be purchased individually, are uncoloured but tend to follow the same marking format as Aluminium rings. They are more commonly used on larger parrots because of their strength and resistance to damage. 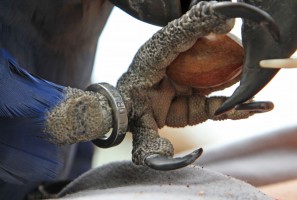 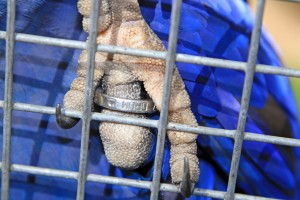 A split ring can be placed on the bird’s leg at any age but it can be more easily removed. Markings tend to follow the same format as in the example above. Split Aluminium rings should not be used on the majority of parrot species as they will have no difficulty removing them with their strong beaks. Split Stainless Steel rings provide a better solution for species prone to ring removal e.g. Lovebirds and African Grey Parrots.

Most rings sold in the UK are supplied by Avian ID, which also produce rings for the Parrot Society UK (PSUK).

For further guidance on ring formats, sizes and fitting instructions, visit their Website at: Avian ID

Plastic - Closed and Split formats (not recommended for any parrot species). 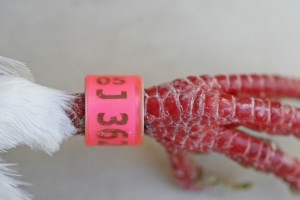 Plastic ID ring on a pigeon

Stainless Steel Split Pin rings – Of European manufacture, these rings are seen on many parrots bred by Zoos and dedicated Parrot breeding centres e.g. Loro Parque, also used by some vets to identify a bird’s sex. Gold coloured rings are used for hens and black rings used for cocks. 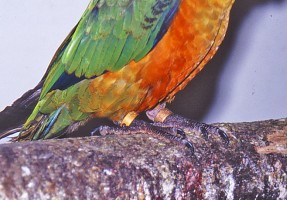 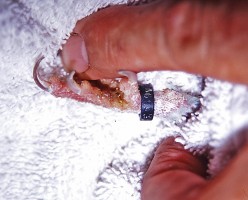 Split Steel rings - Once commonly used on larger parrots to indicate the sex of a bird. Often stamped with a Vet’s initials, ring placed on the left leg for a Hen and on the right leg for a Cock.

Ring colours generally follow the format used by COM (Confederation Ornithologique Mondiale) and are now cycled every 6 years. The new 6 year colour cycle was set in 2016.

Going back over the years, the colours are as follows: