Deaths in Parakeets and Cockatoos Caused by Adult Ticks

DEATHS IN PARAKEETS AND COCKATOOS, CAUSED BY ADULT TICKS
by Les Rance, UK©

For a number of years prior to the 1999 breeding season I had lost the occasional parakeet due to an adult tick attaching itself to the bird and taking a meal of blood. I do not think that I ever lost more than two birds per year. Although, I aim to keep losses as low as possible, there was little information available on how to control these pests and other breeders did not appear to be having a problem. Consequently, there was not a great deal I could do, other than monitor the odd incidents. Even in the manual of Parrots, Budgerigars and other Psittacine Birds published by the British Small Animal Veterinary Association only just over two lines had been written on the subject of ticks. (AKJ 2018 - the latest BSAVA 'Manual of Avian Practice' has a few more lines, and some photographs illustrating the damage caused, plus treatment advice. Keeping Parrots - Understanding Their Care & Breeding, by Alan K Jones 2011 includes a couple of paragraphs on this subject.) 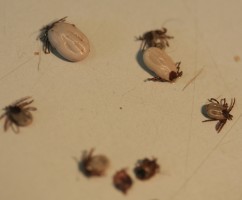 A variety of ticks of different sizes, none fully engorged (AKJ)

One thing that was obvious was that all the losses were coming from two blocks of aviaries that were within three feet of a tall beech hedge owned by a neighbour whose garden was very overgrown and had Roe deer, Muntjac deer and grey squirrels living in the 'jungle'. Both blocks of aviaries have a central corridor running parallel to the beech hedge, with aviaries off both sides. I have never lost any parakeets or cockatoos, from ticks, where the birds are housed in the aviaries furthest from the hedge.

More in interest than any hope of being able to stop this problem I had taken dead parakeets, with the blood filled tick attached, to my vet so that he could show his students or raise the matter with other vets. In general my tick problem was a fairly low key affair but still something that interested me and I was gradually learning a little about the subject and certainly knew where to look on the body for these pests when I found a dead bird, to see if a tick was attached. Only once did I find a bird that was still alive with a tick on it and that was an adult hen Lutino Ringneck, which died within two hours. As I look at all my birds everyday, I am sure that adult ticks kill very quickly, as all the other victims have been fine the previous morning and then found dead the next day. Ticks appear to attach themselves to the head, neck or mantle (between the wings on the upper back), maybe this is because the host finds it more difficult to remove them from these locations or the feathers are finer and therefore the ticks can burrow more easily to the skin, I am not sure.

Once ticks have had a meal of blood the body is about the same colour and size as the head of a match. If I find a dead bird I usually feel the most likely areas, head, neck and mantle, this is quicker than looking at these areas because the ticks are relatively large and more easily located by using this method. 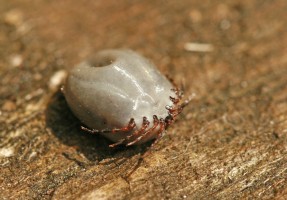 Fully engorged adult tick, lying on its back to show four pairs of legs, with small mouth parts between them (AKJ)

It appears that it is only adult ticks that are 3-4 years old that have the ability to kill parakeets or cockatoos, before this age they will attach themselves for a meal of blood and once full, drop off the host causing it no great harm and return to its hideout. I was interested to understand why programmes on television featuring vets will show anaemic hedgehogs with 20 or more ticks attached, the ticks are removed and they are given a meal and placed under a heat lamp and the next day they are looking much better. It appears that species native to this country have, over many years, built up an immunity to the chemical that adult ticks develop and use to stop the blood clotting and hence allow them to obtain a quick meal of blood.

It was the Summer of 1999, that caused me to take my tick problem much more seriously. Eight deaths, mainly to strong adult breeding birds, from the 17 aviaries that run closest to the beech hedge were too many birds to lose in a single year. The majority of the losses were in July, August and September, but one bird died in December 1999, proving that adult ticks are still active during the winter months, if the weather is mild. It was now time to take urgent action and have a meeting with my vet to see what was the best course of action. As my aviaries are built of wood and have a clear plastic roof and stand on a sandpit his advice was to remove all 10 tonnes of sand (a great number of barrows full!). Then pressure wash all the wooden areas and finally treat with insecticide and spray each bird with Frontline*. As it was winter, I moved all the birds to the aviaries on the other side of the central walk way thus doubling up with the existing inhabitants, this actually worked very well with little fighting and no losses presumably because the birds were not in breeding condition.

Once all the sand had been removed and harrowed well away from any aviaries, I then pressure washed all the feeding shelves, nest boxes and wooden structure very thoroughly. Twelve of the aviaries were built in 1981 and were 18 years old, the pressure washer made them look sparkling but it was a very wet cold job with the spray bouncing in all directions, aviaries that are only three feet wide are not easy to pressure wash! I left the aviaries to dry out for three weeks before filling them with 10 tonnes of fresh sand. By now it was late February 2000 and I was eager to get the birds back into their aviaries and also allow the birds that had shared their flights with the 'evacuees' to be able to settle down for the coming season.

I decided that I would wait until June before I used the insecticide as that was when the ticks appeared to start causing a problem. In fact, I never used the insecticide or the Frontline* on the birds and I am very pleased to say that there have been no losses since the flights had the sand changed and they were all thoroughly pressure washed.

Certainly since writing this article a few months ago there is no doubt that ticks are affecting many bird keepers. Additionally, the current veterinary thinking is that probably it is the toxin injected by the tick to prevent the victims blood from clotting that kills the bird.

AKJ adds 2018: Ticks live for most of the year resting in vegetation, but will climb to find a suitable host when they require a meal of blood. That are found particularly in areas where there are sheep, rabbits, deer or hedgehogs, and most vulnerable are parrots living in outside aviaries with overhanging plants, as Les Rance discovered. The ticks will attach to the unwary bird by way of their sharp, barbed mouthparts and suck blood over the next few days, swelling in size as they do. Once sated, they will drop off, but they inject an anti-coagulant into the puncture site. Some birds will react to this substance, and will be found suddenly dead, as in the examples quoted above. Birds of prey are equally blighted by this parasite, with similar effects.

* 'Frontline' spray is a parasiticide intended for use on external parasites of dogs and cats, and its active ingredient is 0.25% fipronil. It has been proven to be safe and effective for use on birds, but the 'spot-on' formulation for dogs and cats should not be used in birds. 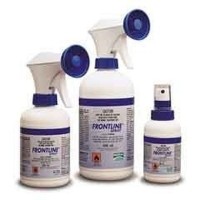 Frontline spray for cats and dogs in different bottle sizes