When I first started in avian veterinary practice, a common finding in pet parrots were small nodules around the face – particularly around the eyes or under the chin – and under the tongue. Expressing these nodules revealed a cheesy (caseous) thick yellow content, and they were generally termed ‘sinus abscesses’, or more specifically (relating to their anatomical position) ‘Sub-lingual, sub-mandibular or pre-orbital abscesses’. Strictly speaking, these were not abscesses, as they were not accumulations of pus, resulting from bacterial infection. Rather, they were collections of dead surface cells, produced in excess, then shed to build up in these loose pockets. The excessive cell production (hyperkeratosis) with subsequent shedding and accumulation (desquamation) was the result of a chronic lack of vitamin A in the birds’ diet. This condition also manifested with a loss of the protruding papillae from the margins of the distinctive choana – the split between the mouth and nasal cavity, that is a particular feature in birds.

A deficiency (or lack of) this vitamin is known as hypovitaminosis-A. An excess (which is much more unusual) would be hypervitaminosis-A. 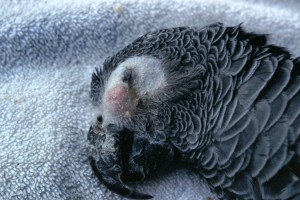 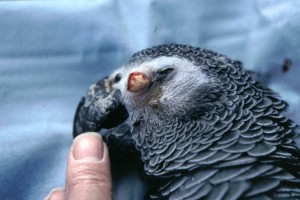 Species most commonly affected were primarily African and Timneh grey parrots, and several of the Amazon species. This may or may not reflect an increased incidence in these birds, but more likely it is just a reflection of their popularity in captivity. However, African grey parrots are renowned for being ‘faddy eaters’, and will self-select a small number of favoured items from what they are presented, thereby not taking in a balanced diet. Over the years, we have become much more aware of the nutritional needs of parrots, and therefore diets have improved immensely, but occasional cases of these unique deficiency problems do still appear. 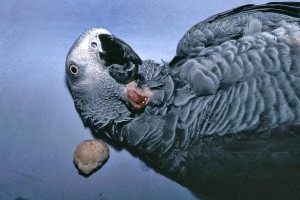 Sub-mandibular caseous mass shelled out of cavity under jaw

Vitamin A is an essential fat-soluble micronutrient. It is involved in many metabolic processes such as developing immunity, growth, repair, vision, reproduction, and embryo development. Its lack affects the production of epithelial cells which form protective linings of the respiratory, urogenital and gastro-intestinal tracts, including salivary glands. These linings become thickened (squamous metaplasia) and less functional, and affected birds have a lowered immunity rendering them susceptible to infections. These secondary bacterial, viral, protozoan or fungal infections, plus the excessive desquamated keratin cells, result in the above-mentioned granulomata, or ‘abscesses’. The skin of the legs and feet can also become thickened, while eyes may develop a sticky discharge. Retinal damage can result in partial blindness. Metaplastic changes in the renal system can result in kidney damage. Deficiency may also affect feather quality and colour, and reduce reproductive performance and fertility. 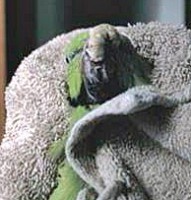 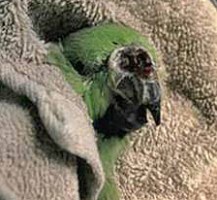 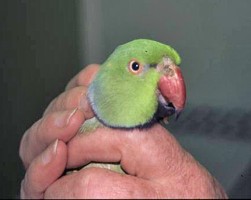 Being a fat-soluble vitamin, vitamin A can be stored in the liver, unlike water-soluble vitamins such as B and C, that are eliminated quickly from the body. This means that reserves built up before a bird’s diet became deficient will tide it over for some time, and therefore the onset of clinical signs of hypovitaminosis-A is insidious, often taking many months. Conversely, once clinical signs are seen, the deficiency has been present for so long, that it will take equally long to reverse and treat the condition – if the damage is not already too severe.

It is easy enough to lance and squeeze out the caseous contents of the nodules once they are identified, but the underlying reasons for their development has to be addressed long term. This will involve supplementation with vitamin A – initially perhaps by injection, to provide a quick input, followed by oral supplements and improved diet. Foods that are rich in vitamin A strictly speaking are only those of animal origin – liver and other meats, plus eggs. Vitamin A can be manufactured in the body from its precursors, which are called carotenoids, and these are found in yellow, red or green leaf, vegetables and fruits. These include kale, spinach, broccoli, peas and green beans, carrots, sweet potatoes, red peppers, mangoes, papaya, apricots. There is an argument against using brassicas (kale, spinach, broccoli), as the oxalates they contain may block the absorption of calcium, but in practice the amount consumed by a parrot would be insignificant in this regard. Seed and nut-based diets are very low in either carotenoids or vitamin A, hence the common finding of this deficiency in birds that eat nothing but seed. 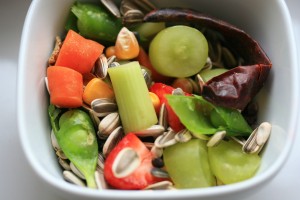 A selection of fruits and vegetables, but mixed with seed, that many parrots will preferentially select.

The problem is, of course, persuading your parrot to eat such healthy items! Many tricks are suggested: offering them in chunks that the bird can grip in its foot, or chopping them up fine and mixing them together; cooking them lightly (preferably steaming) to enhance the flavour; juicing them and offering them as a drink; or taking them from your own dinner plate to give the bird, so that it thinks it is sharing your meal. In spite of this, there will be many parrots that will not take such nutrients, in which case the only alternative is to use a good avian-specific supplement containing vitamin A or its precursors. Again, these must be offered with moist or sticky food – sprinkling a powder over dry, whole seed will be useless, as the powder will drop to the bottom of the dish, and parrots will de-husk a seed or nut before it eats it anyway. 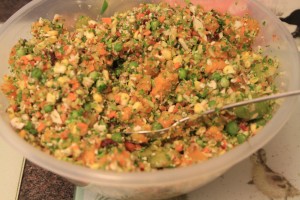 A good mixture of chopped vegetables, rich in carotenoids

A further problem is that this vitamin is quite unstable outside of foodstuffs, being denatured by heat, light and high humidity. Therefore, the processing and storage of artificial diets are associated with a loss of vitamin A content. In spite of this difficulty, several well-produced pelleted or extruded foods for parrots are now available.

All-in-all, a complex problem that in theory is easily remedied, but in practice can take some effort and ingenuity on the part of the parrot-keeper. In spite of all this, the condition of vitamin A deficiency in parrots is undoubtedly less common than it used to be, as we have become more aware of the nutritional requirements of parrots, and ways of dealing with them.