BLACK-CHEEKED LOVEBIRD (Agapornis nigrigensis)
One of the most threatened lovebird species
by R.J.McMillan © The UK

The Black-cheeked lovebird is one of the nine species from the Genus AGAPORNIS and was discovered by Dr.A.H.B.Kirkmaí in 1904. The first specimens reached Europe some three years later.

The existing ranges of the Black-cheeked are small areas of Zambia, Namibia, and parts of Zimbabwe It has the smallest range of all the nine species with the exception to the Black- collared which is the least known of the genus.

Surveys of the wild population of Black-cheeked indicate that it is Africa's most endangered parrot the initial decline of this species is believed to have taken place in the 1920/1930s by heavy trapping for the bird trade.

Habitat alteration, suitable water holes, destruction of mopane woodlands, resumption of illegal trapping and the additional threat being the irresponsible introduction from other areas of the Nyasa Lovebird limit the recovery of this species in the wild, which are known to hybridise freely with the Black-cheeked. The Black-cheeked is basically the same size as the Nyasa and apart from the colour of its head and upper breast it is almost identical as other features to the Nyasa lovebirds. The former are reasonably hardy in captivity but can be badly affected by conditions of extreme wet and cold.

The founder stock for a captive breeding programme must be selected with the greatest care and detailed records kept of source, age, ring numbers, etc. Contacts with other breeders should be maintained and also contact with the Rare Species Officers of the Lovebird Society around the world, also the efficient use of the Internet could be of considerable assistance in maintaining captive bred populations.

Black-cheeked lovebirds have been crossbred in captivity indiscriminately with other species of the AGAPORNIS genus resulting in quite a large number of fertile hybrids. These hybrids should be avoided at all cost or even culled to maintain the true Species.

The full detailed description of the Black-cheeked lovebird is available is many aviculturists textbooks however the following points may help with the visual sexing of this species. Generally hens have a flatter broader skull, a more substantial beak and a wider abdomen and are more squat but slightly larger in appearance than the cocks. The colouration of the hen is similar to that of the cock except the plumage of the cheeks, which are often less black and browner in colour and a little less glossy. The forehead is less reddish-brown, the neck is rather more green than olive and the orange-red to yellow upper breast area tends to be smaller and paler than in the cock. This lovebird is moderately noisy but is generally more peaceable than other of the genus although will occasionally quarrel if too confined. Its diet consists of a seed mix of various millets, canary, some Niger, hemp and a small amount of sunflower. They also like apple, cheese, pear and small amount of orange, chickweed, brown bread and seeding grasses.

Breeding successes vary due to the small captive population available to aviculturists. This can result is loss of genetic diversity in the captive population, which could account for reduced fertility or fitness, low hatchability of fertile eggs, poor survival of young and increased susceptibility to disease. It is hoped that this article will encourage the true aviculturists/conservationists within our ranks to maintain a pure captive bred population of this species.

The ruthlessness and greed of hybridisation and mutation breeding by aviculturists within captivity, will only help a species ON THE ROAD TO EXTINCTION AS MONEY CAN ALWAYS BE PRINTED, EXTINCT SPECIES ARE GONE FOREVER. 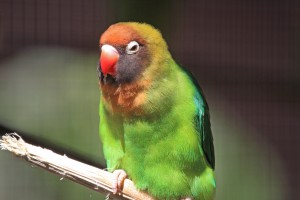