We found the following article in some back issues of the magazine, written originally by John Walton. John was a founder member of the Parrot Society (see 50th Anniversary History of The Parrot Society), and served as the Society's Treasurer from 1985 until 1998. He wrote a series of articles for the magazine under the over-all heading of The Golden Years, but his offering here injects a little humour into bird keeping, and well describes the way that this 'disease' can affect us. Enjoy! Of course, this should not be confused with the genuine "parrot fever", or Psittacosis, that has the potential to cause serious illness in both birds and humans - Psittacosis

By the Late J T Walton

This disease can strike without warning at any age, the most likely type of person to be afflicted is someone who already keeps other types of birds (feathered variety), who pays a visit to a zoo, or who meets another person who happens to keep parakeets. To move into a house next door to a person already suffering from the complaint gives one a 99% chance of catching it.

After cunningly preparing the ground with the wife, by such remarks as: “A small aviary with a pair of those nice birds we saw at Mr Jones last week would just put the finishing touch to our garden”, or, “If we had a pair of those they would be grand company and an interest to you”, the sufferer soon overcomes the initial hurdle. The next stage of the disease takes the shape of rapid visits to timber yards and hardware shops, and for several nights and weekends the neighbours are treated to frenzied banging and outbursts of old Anglo-Saxon words when various parts do not join up, or when the hammer makes contact with thumbs or other parts of the anatomy.

After a few weeks our sufferer stands proudly in front of the completed construction, to the accompaniment of remarks like “You have soon found time to do that, but the kitchen cupboards have been faulty for months” he soon learns to ignore all requests to do various menial jobs in the house.

Now begins another phase: It is essential to fill the aviary without delay and the local paper boy is astounded to see the occupier awaiting his arrival at the unearthly hour of 7.15 am on Thursday mornings with the weekly Cage Bird Magazine (or the postman with Parrot Society Magazine). On receipt, this is immediately opened to the page with birds for sale; paper and pen or telephone are grabbed and a deal is made – after which the condemned man eats a hearty breakfast.

Before long the family car, normally expecting a lazy weekend, is poised ready to shoot off anywhere on these islands, distance no object and our sufferer is soon the proud owner of a pair of Redrumps, Cockatiels or Rosellas. After releasing these in the aviary, he spends most of the day attending to and admiring his new charges, reluctantly allowing himself to be dragged away by his family to take nourishment. The crucial stage of this complaint has now been reached. 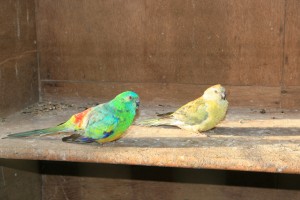 It is uncanny that usually during the first breeding season with our new sufferer, the birds respond magnificently, as if nature knows that a good breeding season will have him hooked for life. Before long the first young emerge from the box and from the glassy eyed look on our sufferer’s face one would think he was the father himself. When this stage is reached THERE IS NO KNOWN CURE.

Because he never dreamt he would be lucky enough to breed youngsters, he finds himself without provision for keeping this windfall from heaven. Thus a repeat performance of the timber yard, construction stage is gone through; lawns and flower borders, which only a year ago were sacrosanct, disappear for all time, as a rapid mushroom growth of flights, roost sheds etc spring up overnight.  All leisure time is spent down the garden with the aviaries and birds, and as dusk puts an end to his labours, our sufferer learns to ignore such remarks as “hello stranger”, “oh here’s the lodger” or the piece de resistance “you spend more time with those birds than this bird now”.

Our sufferer now reads avidly all books and magazines about parrots. Another strange symptom of the disease is the fact that although normally reluctant to be drawn into conversation, should he meet a fellow sufferer he can talk till the proverbial cows come home on his favourite subject.

As the next year or so passes he now becomes adept at dodging his bank manager and goes into the next stage. He buys pairs of the more expensive types of parakeets and can pay over £50 or more without batting an eyelid. Usually after these have been purchased our sufferer departs to bed, most nights to dream of double broods and aviaries full of young Pennants and Mealy Rosellas etc. This will, of course, mean that next season POW’s, Barrabands or even Kings may be added to the collection. Alas, this is where complications set it. Hen Pennants die through egg binding in mid June, cats get on the aviaries, that fine Cock Mealy decides to give up this earthly life for no apparent reason. Mrs GM Rosella decides her new husband is not her type so a divorce must be arranged on the grounds of incompatibility. Needless to say, although there have been plenty of spare Cocks about previously, they have all gone now. 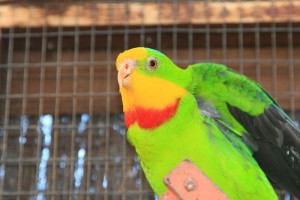 These are but a few of the disasters and upsets ready to strike at any time, but a strange thing has happened to our sufferer, he now accepts these things in his stride, he has become a supreme optimist and next season is going to be the best ever. One could almost say the disease has now run its full course and we are now left with a person who gets endless pleasure, relaxation and interest from a really worthwhile hobby.