Psittacine beak and feather disease (PBFD) was first recognised and described thoroughly in 1975 by Dr Ross Perry, a veterinary practitioner in Sydney. Numbers of birds showing feather and beak abnormalities were identified, initially in private collections and in wild flocks in Australia, but subsequently spreading rapidly around the world. Initial theories as to its cause included genetic or deficiency problems.

It has since been recognised as a most significant disease of psittacine birds worldwide. Research at Murdoch University, Australia, and the University of Georgia, USA has demonstrated its cause to be an extremely small circovirus. Whilst many attempts have been made to produce a vaccine to combat the infection, to date none has been successful. 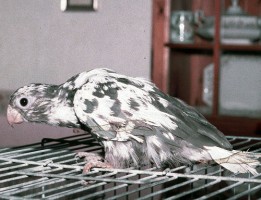 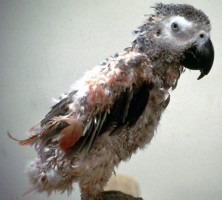 A report in 1907 by Ashby described probably the earliest recognition of an outbreak of PBFD occurring in wild red-rumped parrots (Psephotus haematonotus) in the Adelaide hills in 1888. Since then PBFD has been confirmed in wild galahs, sulphur-crested cockatoos, corellas, rainbow lorikeets, orange-bellied parrots, rosellas, ringneck parrots, leadbetter cockatoos, gang gang cockatoos, king parrots, swift parrots, budgerigars, and many other species.

Flocks of wild cockatoos may have a disease prevalence of 20% (meaning one fifth of the birds are actively diseased), and a seroprevalence of 60-80% (meaning a vast majority have been exposed to the virus). Infection is maintained in a population by diseased birds, but if the virus reaches aviary birds or wild flocks with no resistance, the effects can be devastating. The virus may be spread horizontally – to adjacent birds by direct contact; or in adult carrier birds that reach breeding age, vertically - through the eggs and chicks to affect the next generation. Virus infectivity probably persists in contaminated nests for many months or even years. 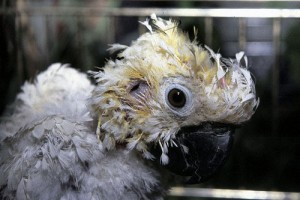 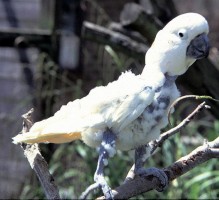 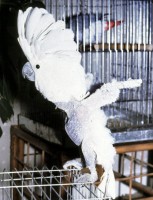 Psittacine circovirus is the smallest virus known to be capable of causing disease, at only 16 nm (nanometers) in diameter. Infections have been identified in other avian species (and also occur in mammals such as pigs), but it appears that only psittacine species are severely affected. The virus prefers dividing cells, and as such will attack tissues of young birds, and those tissues that are growing rapidly or are replaced frequently. This means skin, feathers, beak, oesophagus and crop, as well as organs of the immune system such as thymus, cloacal bursa, and bone marrow. Damage to these latter tissues results in depression of the immune system and thereby vulnerability to secondary infections with other viruses, bacteria, or fungi. Infection of the feathers and beak will produce typical deformities in their growth.

The virus is very stable in the environment, and may survive for many months or even years in feather dust, faeces, or nest material. Infection can be spread easily therefore by inhalation of infected feather dust or dried faeces, or the ingestion of contaminated faeces or crop secretions. It is carried on clothes, feeding bowls and travelling boxes or cages. Widespread dissemination of this virus occurred in the 1980s when captive bred parrot chicks were hand-reared in large numbers in dedicated facilities, with the virus carried from one chick to another by the handler, feeding utensils, or simply in the air. It is very resistant to many disinfectants. 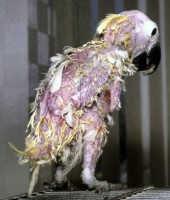 The incubation period and clinical signs produced by this virus are very variable, depending on the infective dose (amount of virus infecting the bird), and the age of the parrot and the stage of feather development at the time of infection. As the immune system develops, birds become more resistant to infection, and the signs less severe. In general, birds over 3 years old are rarely susceptible, but cases can and do occur in older birds if heavily challenged, or maybe latent carriers become clinical following an episode of stress. In juvenile (especially hand reared) birds with an undeveloped immune system, the incubation period between infection and development of disease may be as short as 14-28 days, and illness will be severe. In older birds, incubation can be many months, and clinical signs are insidious and chronic. The course of the disease is very variable and carrier birds shedding the virus are common. It is therefore difficult to eliminate the virus from an infected population, and many collections of birds are positive.

Disease patterns may be described as:

Peracute – sudden death with no previous signs of illness in newly hatched chicks, most commonly cockatoos and African grey parrots.

Acute – mostly in nestlings or very young birds during their first phase of feather growth. There is usually a loss of powder down, with resulting shiny black beak in those birds whose beaks are usually dusty grey. There may be abnormally coloured feathers (e.g white in the normally black Vasa parrot, pink in the African Grey). Affected birds become quiet and depressed, and with a generally ‘grubby’ appearance. Many have diarrhoea, and all will succumb quickly to secondary infections. The classic manifestation of this type of PBFD is the young, recently purchased African grey parrot, showing depression, abdominal pain, bunching spasms of the legs and feet, with a post-mortem examination revealing Aspergillosis infection. This fungal invader is a common secondary problem in such an immuno-compromised bird.

Chronic – the classic form of the disease, found in older birds, with feather loss and deformity increasing with each moulting cycle. Beak and claws become brittle, necrotic, and deformed. Feather loss will eventually affect the whole body, including the head, whereas plucking parrots will have normal head feathers. This disease is invariably fatal, but individuals may survive for many years if allowed to, and supported by their owners.

Carrier state – birds showing no clinical signs of the disease, but actively infected and shedding the virus to infect other birds. Usually mature birds, and commonly budgerigars, cockatoos and cockatiels. These birds are important in the control and management of the disease in captive populations. 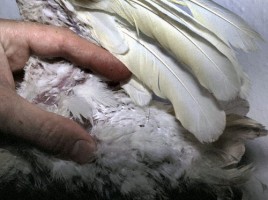 Left: An Umbrella Cockatoo with early signs - depression, shiny beak, feather discolouration. Right: Powder down feathers on the flank in a cockatoo. (AKJ)

Clinical signs in the chronic form are highly suggestive, while most birds suffering acute PBFD have a severe leucopenia (marked drop in the white cell count of the blood). Proof positive is obtained by identifying the presence of the virus in the bird, and currently this is best achieved by a PCR (Polymerase Chain Reaction) test for the virus DNA. This test is accurate and highly sensitive, since minute amounts of virus DNA will be detected. Thus it is important that sample collection is not contaminated from other sources, such as in-contact birds or the environment.

If the test is positive, it confirms the presence of PBFD virus DNA, so provided the sample is uncontaminated, then the bird is infected. If the test result is negative, it does not necessarily mean that the bird is free of infection, just that the sample taken had no virus in it at the time. This can occur if feathers are submitted, since not all feathers on the body will contain virus. This is especially true in young birds with acute disease. Blood samples are more reliable, but in cases with a profound leucopenia, even this can be misleading. The most regularly reliable sample is a bone marrow biopsy, but this obviously has to be taken by an experienced veterinarian, and not something that can be performed by the owner or breeder. Finally, the PBFD virus is known to occur in different strains, and not all laboratories doing PCR testing can pick up all strains.

Therefore a ‘one size fits all’ screening test is not reliable. Birds for sale may be tested on feather samples showing negative, and subsequently sold as free of infection, yet prove to be positive later. Birds early in the acute phase of the disease may throw a negative test result. Carrier cases may show negative on some samples, but positive on others, depending on the tissue taken. Positive birds with no clinical signs should be re-tested after one month – it may be that there was simple contamination of the initial sample, or that transient contact with the virus has subsequently been eliminated.

Treatment and prevention of PBFD

Currently there is no cure for this devastating disease. Some budgerigars and lovebirds have been known to ‘exist’ for years with the infection, and there are reports of gradual recovery in these species, although this must cast doubt on the accuracy of the initial diagnosis. All larger psittacine species invariably die sooner or later. Many attempts have been made to produce a vaccine to prevent spread of the infection, but to date (2018), these have not succeeded. Some veterinarians have injected interferon (an anti-viral drug) into young parrots in the early stages of infection, with some limited success, when using interferon derived from poultry. Commercially-available interferon derived from cats has not worked.

Single pet birds in caring homes may be maintained provided quality of life is reasonable. Supplementing with vitamins, minerals, and probiotics to boost the immune system will help, and treatment of secondary infections will be required regularly.

Infected or positive carrier birds in collections should be culled, and all cages and equipment thoroughly and repeated sterilised. Remaining birds should be tested repeatedly and regularly to detect new infections. Once a group of birds is contaminated, it will prove very difficult to totally eliminate this virus.

Research continues, and diagnostic techniques are improving, but this disease is now well established in both wild and captive populations of psittacine birds, and will continue to give problems to aviculturists and avian veterinarians for many years to come.